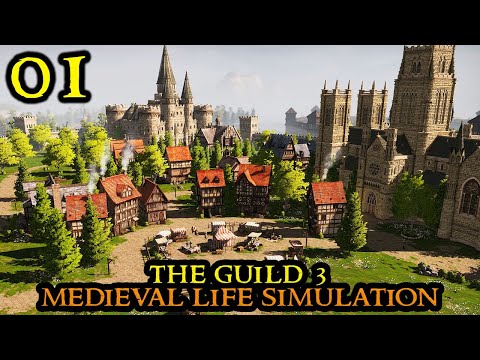 There are enough simulators of medieval life in the market. Some games go into a macro-management, allowing you to build entire cities, configure the economy and wage bloody wars-as the history of Europe from the VI to the 16th centuries says (and some historians believe that this era ended in general in the 19th century, but I adhere to a more popular point vision).

Others offer you the experience of survival at that harsh time, taking control of one character. Here the Survival genre is already more suitable, in which the character has to obtain resources independently, to engage in construction, hunting and agriculture.

But there is one series among these games that tried to absorb all the best of different genres, providing in the end its own version of life in medieval Europe. The name of this series is The Guild, and we will talk about the third part today.

It is necessary to note the fact that The Guild 3 came out in September 2017, however, in the format of early access. And all these years, the game was finalized, polished and tuned to go into a full release on June 14, 2022. However, the long time did not play on the hands of the product. Still, five years is serious. The fanbaza of the last part gathered solid, they waited for the game, but they received a very raw option at the start, which is why the community was well depressed. But the developers promised to finish everything and serve in the right form. It did not work out. The final result is disappointed in almost all aspects.

Create the head of the dynasty

The game begins with the choice of the script and the city in which you will develop the dynasty. All the significant capitals of those times are represented, but for small cities there was a place. The maximum number of competitives, with whom yours will have to compete for a place in the sun depends on the choice.

In addition to the starting city, you are allowed to choose other significant parameters-the level of complexity, how many years passes in one round, the game mode (whether you are poor or start with the status of a citizen) and the conditions of victory in the game session. The conditions are very different, from the classic become ruler and hold the power of a certain period, to very sophisticated ones, such as establishing large trading routes with other countries and cities or generally a military campaign. And you can start a free playwife game in which there are no victory conditions.

Next, go to the setting up of your character. And here comes the first disappointment-the appearance editor is extremely scarce. You are offered a choice of only a couple of votes, three types of physique (thin, dense and well-fed), eight options for people with pre-prepared presets, the same number of clothing options and the non-working hair color. Yes, like this-on the release we get a non-working function even in the framework of a limited choice of five options. It is very pleasant, comrades developers, it is clear that you spent five years in vain, finishing the game.

Next, we choose a religion that our dynasty will adhere to. In total, three types are Catholics, Protestants and laity. The first two camps traditionally cannot stand each other, ignoring the commandments of the Bible, and the latter prefer to live on the principle of my hut from the edge and not interfere in religious conflicts.

Having finished with religion, we proceed to the choice of starting skills. There are 12 of them, but at the very beginning you can take only 1. There are options to become a farmer, a submarine (yeah, called), a fisherman, a craftsman, a copper, a potter, a herb, a preacher, a barber, a robber, a tomb and a minstrel. The choice is rich, and not all professions are balanced here, but it will be more interesting to replay scripts. By the way, having chosen one thing when creating a character, this does not mean that the rest of the skills are closed for you. Not at all, during the game you can study new professions.

And the final stroke is the distribution of glasses between six characteristics-strength, dexterity, wisdom, attention and charisma.

What should we build a house

Choose? Well done, and now realize-what you sat and thought what profession to make a starting, in fact, does not affect anything. Yes, yes, it doesn’t matter who you have become, everyone starts exactly the same. You are building a profile building, hiring hard workers there, and run yourself to make a bouquet of flowers and wash to quickly roll up to some unmarried lady and enter into a legal marriage with it and begin to plan the kids.

The process of courtship for the mamzels is implemented extremely primitively. In training (and it is very desirable to pass it) you will be explained to you that before the chosen lady of the heart, you need to look neat and have signs of attention. That is, first wash, and then go compliment her. And do not forget to take with you a bouquet of flowers that you made earlier. If your charisma parameter is quite high, then a couple of tackles, and you can make an offer of hands, heart and wallet. You can choose a wedding in the church, or modestly get married without lush festivities. It’s time to take care of the kids in the attic of your Halup and extend the dynasty. Half years have been done.

And such a primitive in absolutely all matters than you would not want to do. While your hero looked after his future wife (by the way, you can then get his mistresses, if you wish, and fly to the bastards), your hard workers will earn the first capital, making everything in automatic mode. The resource supplier himself escapes to the nearest source of these resources, and artisans will convert the raw materials to the goods and sell it in the shop.

Yes, you can engage in micro-management, and at some stage you will have to personally monitor the supply and distribution of assets, but this routine is tired of it very quickly, since there is an opportunity to turn on the automatic mode, and artificial intelligence will decide how best to do. As a result, you accumulate capital, which must be invested in various ways.

For example, you can get a new title for yourself, which will discover new prospects for earnings for your hero. There are 15 steps in the career ladder 15, from serfs to Archduke. Each stage gives new opportunities, but also requires more attention.

Almost every effect is displayed on the reputation of the dynasty. This reputation is presented in the form of special points that you spend, like money, on the opening of new specialties. As a result, your head of the house (and in the future heirs) will become a master of all hands. In addition to the growth of influence, the hero’s level is also growing, which is expressed in free points of characteristics that can be distributed at their discretion.

Sooner or later you will want to take some administrative position in local governing bodies, and already do political affairs. For example, adopt laws or set new duties.

At the same time, it is not at all necessary to build a good thing. Around the envious, and competing families do not sit on the pope evenly, building insidious plans against you. In order to once again not get a pen under the rib from local bandits hired by ill-wishers, hire your bodyguards. Better yet, become the head of the gangst gang yourself and hold the whole district in fear.

And in order for your unlawful actions to be reputated, enter the city council and accept the law on which beatings on the streets are not punished. Ready, now no one is a decree. You are a decree!

In general, in The Guild 3, almost everything that you think in the framework of the game is easily given. You do not need to follow the well-being of family members, although sometimes they are sick, but they are quite able to cope with the trouble. You become bored very quickly, so the game does not offer any call. But this is far from the main problem.

The first and obvious that you will catch your eye is an overloaded interface. I saw many games in which I need to constantly open several windows in a row, read certificates and explanations, but what is happening in The Guild 3, behind the facet of common sense. I got the impression that the UI designer in Purple Lamp is a natural sadist who hated all of humanity.

You will read, read, read, read and read the lion’s share of the gameplay. A bunch of menu, substitution, it is not clear what is where it is, why is it necessary, dozens of buttons with duplicate functions and all in that spirit.

Not every player will stand this pressure. And after all, all this information is falling on you immediately, from the first minutes of training. Where the QA department looked, and what the producer thought about when he agreed to the implementation of this nightmare is not clear.

The second global trouble of the game is outdated graphics. Even by the time The Guild 3 exit in early access (I remind you, 2017) the picture looks very poor. And no graphics settings here help. It is clear that the game cannot boast of a large budget, but in such cases many gaming companies go to the trick, stylizing the appearance of the game.

But not in our example. Having decided to maintain the style of realism, the developers did not take care of anything at all. Models of buildings and characters are very poor, like textures. There is no question of any beautiful effects, animation or details.

Things are a little better with musical accompaniment. But here the whole thing is in classic medieval melodies that were written specifically for the game. It is difficult to spoil them. But in this case, the atmosphere of the game does not really help.

We add a weak graphics to this, and we get an average product at the output in all respects, which pulls 6 points out of 10. By the way, the same opinion and many players who acquired the game in Steam. Now The Guild 3 has only 60% of positive reviews.