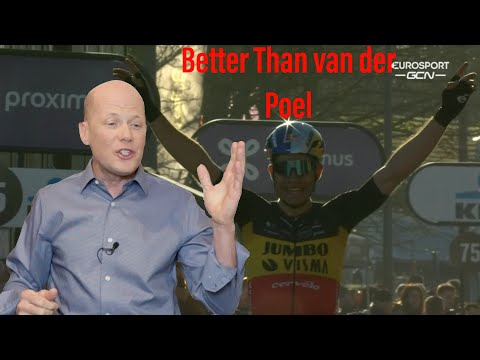 The end of the race reminded of the 1st stage of Paris-Nice: At the beginning of March, three drivers of the team Jumbo-Visa were alone on the target straight, Christophe Laporte was allowed to victory in front of Van Aert and later overall winner Primoz Roglic.

At the 64th edition of the cobblestone race E3-Harelbeke it was again Van Aert and the Frenchman Laporte, who drove arm into arm over the finish line. This time the front wheel Van Aerts was slightly front, the Belgian champion celebrated such a home win. At the same time, he also took over the role of one of the top favorites for the next Sunday outstanding Flanders tour. In the past, it happened more often that drivers who cheered in Harelbeke could also decide the Flanders Tour for themselves. Most recently, this was the case last year at the Danes Kasper Asgreen.

At the 64th edition were 204 kilometers with 17 toxic climbs – so-called lighting. It took some time until a first top group had found to which the Lukas Pöstlberger’s Bora-Hansgrohe also found. But when Jumbo-Visa increased the pace, it had happened around the outliers. It formed a large group with almost all favorites. From this out, around 40 kilometers in front of the destination Van Aert and Laporte started the decisive attack on the Paterberg. The duo could turn out a big lead, which was still over one and a half minutes in the finish. Three students occupied Stefan Küng from Switzerland. German drivers did not matter in the decision.

The WorldTour continues to stay in Belgium: On Saturday, Gent-Wevelgem, on March 30th, rises across Flanders, before then on April 3, the Flanders Tour is the highlight.