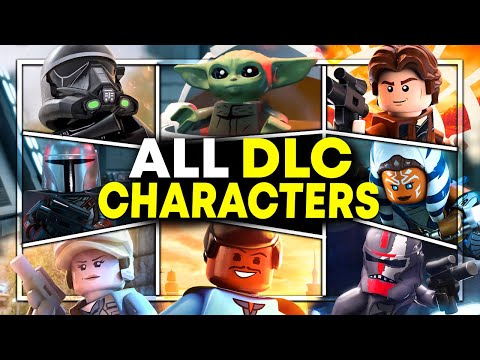 Lego Star Wars: The Skywalker Saga finally arrives on PlayStation 5 and PS4 on April 5th, and the plastic platform game will feature hundreds (!) Playable characters from the entire science fiction franchise. Premises to the most recent trilogy, each era of the Lucasfilm giant will be represented. While the basic game focuses on the nine main films, the DLC will present even more familiar faces of derivative films and television programs.

Various packages of characters are scheduled for launching the game and beyond, each bringing even more characters playable to the vast list. You can buy these packs alone or you can buy the Lego Star Wars Seasonal Pass: The Skywalker Saga Character Collection to have access to everything as and when it exit. We have listed what each pack contains under the main story.

When launching the game in April, two characters’ packs will be available. The Mandalorian Season 1 and Solo packs: A Star Wars Story include each of the heroes and the bad guys of their respective sources. Two other DLC packs will be ready to start the launch day – the Classic Characters Pack and the Trooper Pack – but only if you have anticipated access pre-commanding the game numerically. If you do not have early access, the Classic Characters Pack will be launched on April 19 and the Trooper Pack will arrive on May 4.

Beyond launch, other DLC packs are on the way. On April 19, the Rogue Pack One: A Star Wars Story will be available, and May 4 will see the exit of the Mandalorian Season 2 and Star Wars characters packs: The Bad Batch.

It’s a lot of things to come in a game that seems already packed. Once again, all this is included in the seasonal pass of the Collection of Characters, but we do not yet know what prices look like. Hope it’s not too bad. Will you pay for all this DLC? Find out below what each pack of characters contains and leave your comments in the comments.